In recent years, the level of corn residue remaining in the spring has increased significantly in many fields. This may be due to changes in several production practices: 1) higher plant populations and superior fertilization practices that increase corn grain yields also increase stover yields, 2) use of foliar fungicides and Bt traits results in improved corn stalks that resist decomposition, and 3) reduced tillage practices result in less residue breakdown. 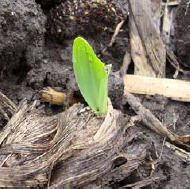 In these fields, growers must manage corn residue properly or risk stand establishment issues. This is especially important in corn following corn, as corn is less tolerant of residue than soybeans. Residue reflects sunlight and insulates the soil, reducing both warming and drying of fields in the spring. This may prevent early planting, or result in reduced or non-uniform emergence. Uniform emergence is critical to optimizing yield potential in corn. Plants that emerge later than their neighbors may be out-competed throughout their development, and yield may be reduced proportionately to their delay. 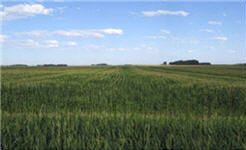 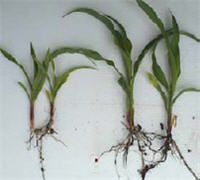 To help ensure uniform stand establishment for highest yields, growers must carefully manage corn residue, especially when planting fields back to corn. Corn residue should be managed during combining, after harvest in the fall, before planting in the spring (if necessary) and during planting.

Management of corn residue should begin at harvest with uniform distribution of chaff and stalks behind the combine. Uniform distribution has advantages for growers in no-till, minimum till or conventional till systems, including better erosion protection, less plugging of tillage or seeding equipment, and improved stand establishment. Success in uniformly distributing crop residue this fall can also help eliminate tillage passes next spring.

Today’s combines, with wider grain platforms and corn heads, concentrate a larger volume of plant material into the same narrow band exiting the combine. This material must then be spread back onto the wide harvest swath, making uniform distribution more challenging.

Combines with header widths of 20 to 30 feet or more may not be adequately equipped to uniformly distribute large volumes of residue. In such cases, adding manufacturer options or after-market equipment to more aggressively manage residue may be needed. Modifying, checking and maintaining existing equipment may also help to improve residue management (See Residue Spreading and Management Tips below). 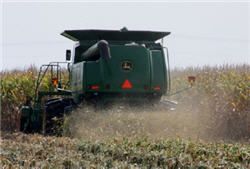 Even residue distribution across the entire harvest swath can help avoid stand establishment issues in the spring.

Straw and chaff. Every grain combine discharges 2 streams of material. Straw is the material that passes through the threshing and separating units of the combine. It consists of corn cobs, husks and some cornstalk pieces. Chaff is the material which is blown or otherwise discharged from the cleaning unit (cleaning shoe) of the combine. It contains smaller "chaffy" pieces of plant stalks, cobs or hulls.

Spreaders and choppers. A straw spreader uses blades or rubber batts rotating in a horizontal plane to intercept the exit stream of straw and deflect it behind and to the sides of the combine path. Most pieces of crop residue remain intact. A straw chopper uses a series of metal flails or knives mounted on a horizontal shaft or drum rotating at high speeds to break or cut residue into smaller pieces prior to distributing. A chaff spreader typically uses spinning disks to distribute the fine residue coming from the combine sieves.

Straw spreader vs. straw chopper. Straw spreaders and choppers are interchangeable on most combines, so growers can choose between the 2 (with some combines, a combination of both is available). While the spreader typically distributes residue more uniformly, the chopper can provide more residue cover, since it chops the residue into small pieces before spreading. Most combine manufacturers offer straw choppers as a standard item or option, and few after-market choppers are now available.

Chaff spreaders are most important for crops that produce a lot of light, fine crop material during threshing of grain, such as soybeans or wheat; but they may also be helpful for corn. Chaff is easy to distribute with hydraulically driven single or dual spinning disks with rubber batts attached, mounted to the rear axle. However, because it is lightweight, chaff is difficult to spread beyond 20 to 25 feet with a single disk. Consequently, for harvest swaths greater than 20 feet, dual chaff spreaders may be needed. Swath width and distribution patterns of chaff spreaders can usually be altered somewhat by adjusting 1) the fore-aft position where material drops onto the spinning paddles, 2) the deflectors or shields at various points around the perimeter of the paddles, and 3) the speed (rpm) of the spinners.

Locating spreaders and choppers. Commercial chaff and straw spreaders and straw choppers are now available to fit most combine models. Producers can obtain more information from equipment dealers, Cooperative Extension, and private fabricators. A list is also available from the PNW Conservation Tillage Handbook Series. One option for growers who find their corn stalks challenging at planting is more aggressive treatment of the stalks at the corn head. Crushing, laceration and shredding of stalks at the combine may help in subsequent stalk degradation by exposing them to microbes and weather. Many equipment manufacturers offer optional “knife rolls” or more aggressive stalk rolls to replace standard stalk rolls on corn heads.

New Holland offers optional "sharpened knife rolls" for corn heads to chop the corn stalk residue for more even dispersal on the field.

Pixall knife rolls are an after-market item for John Deere combines that aggressively "condition" stalks at the corn head. Their use may eliminate a tillage pass and aid in planting in the spring, according to the manufacturer.

Geringhoff U.S. produces the Rota Disc corn head that thoroughly chops stalks as they pass through the head, eliminating the need to chop stalks postharvest.

Some experts suggest leaving 12 to 18 inches of stalk in the row at combining. In no-till systems where next year's crop will be planted between the old rows, this keeps more residue anchored and out of the row middles. Taller stalks may catch on planters or fertilizer equipment, however.

Stover production by corn plants is roughly equal to the weight of grain produced. This means when corn yields exceed 200 bu/acre, stover yields may reach 12,000 to 16,000 pounds/acre. That's over twice the residue produced by most other crops, and over twice the residue necessary to provide 100% soil cover. If residue is not managed properly, this can lead to stand and yield reductions caused by excess residue. Research suggests that corn yields may be reduced when fields have 90% residue cover within 2 inches of the seed furrow.

Fall tillage. Corn residue is more resistant to decomposition than that of many crops, which can compound the problem of excess residue. Residue that is not incorporated in the fall will largely remain intact in the spring because the decomposition process is slowed even more without soil contact. In general, 5% to 10% more corn residue is decomposed when tillage occurs in the fall than in the spring. 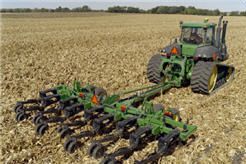 Most primary tillage implements, including chisel plows, mulch rippers, disk rippers, etc. are designed to incorporate some but not all of the crop residue on the soil surface. In addition, depth and speed of tillage, and type of shovel or point selected will determine the amount of soil moved and residue incorporated. On flat soils not subject to erosion, moldboard plowing is still an option for burying the most possible residue. Equipment manufacturers and extension ag engineers can provide guidelines regarding percent residue incorporation by tillage implement type and operation.

A relatively new approach to fall residue management is the use of "vertical" tillage implements to size residue prior to primary tillage. This equipment, employing narrowly spaced ripple coulters, is operated at high speeds of 9 to 10 miles per hour for most effective sizing of stalks and root balls. High horsepower is generally required for this operation.

Zone tillage. "Zone" or "strip" tillage is a crop production system that combines the soil warming and drying benefits of tillage with the soil conservation benefits of no-till. In this system, a strip 6 to 8 inches wide is tilled in the fall, and the remaining inter-row space (usually 22 to 24 inches) with its crop residue cover remain undisturbed. Tillage is usually accomplished using a shank and knife to lift the soil and disk blades to contain the loosened soil and form it into a raised ridge or berm. In most cases, fertilizer is applied during this tilling operation. In the spring, the tilled strips dry out and warm up much like a conventionally tilled field. The planter units follow these tilled strips, dropping seeds into the center of the raised berm, and often applying additional fertilizer.

Chopping stalks postharvest. An alternative approach to fall tillage is fall chopping of stalks with a flail-type or rotary blade chopper. Although very effective at sizing residue, this approach is not always desirable. Because it flattens the residue profile and distributes stalk residue between the rows, it reduces the advantage of planting next year's crop between last year's rows. Flattened residue is also more prone to "matting" on the soil surface, resulting in cool, wet soils in the spring. Chopped stalks will reduce the percent residue cover by 4% to 8%.

Grazing or baling stalks. Cattle producers may consider grazing their field or baling some of their corn stalks for feed or bedding. A few growers may also have the option of selling corn stalks for ethanol production. In most cases, only a portion of the stalks should be removed so that the benefits of stalk cover are not completely lost. Strategically removing stalks from less-erosive field areas in alternating strips year-to-year is recommended.

Remember that stover contains valuable nutrients – about 17 pounds of N, 4 pounds of phosphorus, and 20 pounds of potassium per ton. If residue is removed, these nutrients will need to be replaced by increased fertilizer rates. For that reason, growers should consider the replacement cost of residue when deciding whether to remove it from the field.

Fall application of N to stalks? Field research has not shown accelerated breakdown of crop residue due to fall N application. In Corn Belt states, microbial decomposition of residue is limited by low temperature, not soil N.

Spring Residue Management Prior to Planting

Secondary tillage in the spring can further reduce residue ahead of the planter. The chart below provides guidance on how much residue tillage tools will bury. 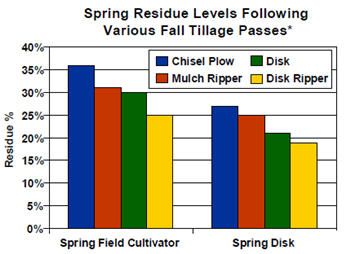 Whether tillage or stalk chopping was performed in the fall, it is important to bury residue as early as practical in the spring if the goal is to reduce high residue loads. Following are tips for successful seedbed preparation when corn residue is excessive on the soil surface:

The final opportunity to manage corn residue is at the planter. Planter-mounted devices include coulters, clearing discs, sweeps, brushes, and rolling fingers. These residue managers can cut and move residue to clear a 6- to 10-inch path in front of the planting units. This serves to minimize the detrimental effects of residue in the row area while maintaining the benefits of residue on the remainder of the field. 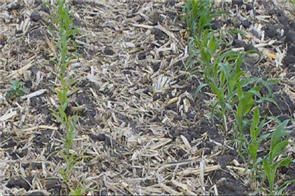